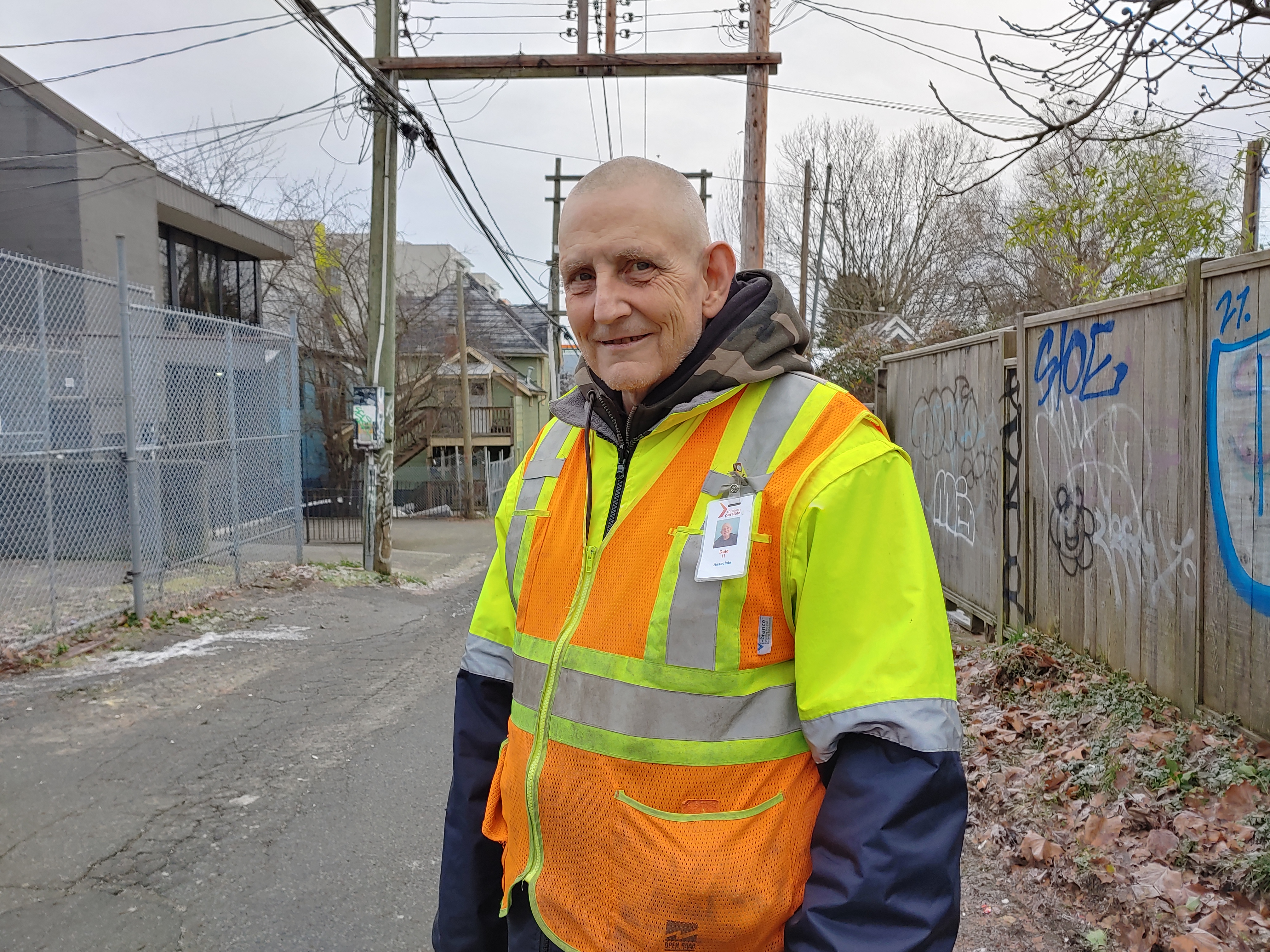 Before coming to Mission Possible, Dale was being placed at various jobs through WorkBC. However, he was disappointed because the jobs would never lead to a full-time position. When he walked by Mission Possible, he saw our sign outside and decided to give our program a try. Dale wasn’t sure what he was getting into at first, but he was curious and he got good vibes when he first walked in the doors.

Dale has really enjoyed meeting new people and getting to work with them at MP. He’s even reconnected with some old friends! Working at MP has also given Dale some financial stability, and it’s helped him get out of the house. His self-esteem has improved as well. Dale shares, “I’ve got a sense of purpose and I’m a member of the team too.”

Because Dale worked on another street clean team for three years, the tasks of the Clean Team are not new to him, and thus he hasn’t had any challenges adapting to our program. Something that Dale appreciates about MP is that there are further steps that he can take to grow his skills and progress at the organization by joining the MP Maintenance Core Team as a landscaping or graffiti removal team member. And that is exactly what he has done!

When he completed his third month in the Employment Readiness Program, Dale was quick to do a trial run working on the landscaping team and enjoyed it so much that he applied for a position! As the successful candidate, Dale worked three full days a week with the landscaping team. He’s found it to be a little difficult as he often goes home with muscle aches which he wasn’t used to, but he loved learning new things like raking and shoveling clippings and leaves into tarps, and clipping prickly bushes as well. He also got to learn how to use a leaf blower. He finds it to be a fun task because he gets to watch the leaves fly through the air. Dale has been getting along with his landscaping supervisor, Craig, really well, and has been receiving positive feedback which makes him feel good. He often likes to share what MP does with organizations and business owners when he sees them in the community.

Despite his enthusiasm, he has been facing some challenges. His mental health has not been the best lately which makes it hard for him to get to work. For him, it’s a big accomplishment to get to the warehouse at 6:30 am, but he still often ends up being the first one to arrive! Dale has also been facing some health problems with his thyroid. One of his goals is to come up with a game plan with his doctors to figure out what’s going on.

Even with his challenges, Dale is happy to share that he accepted a job as a landscaper with a local landscaping company! He likes working and being able to contribute to his pension plan, and is glad to continue to do so.