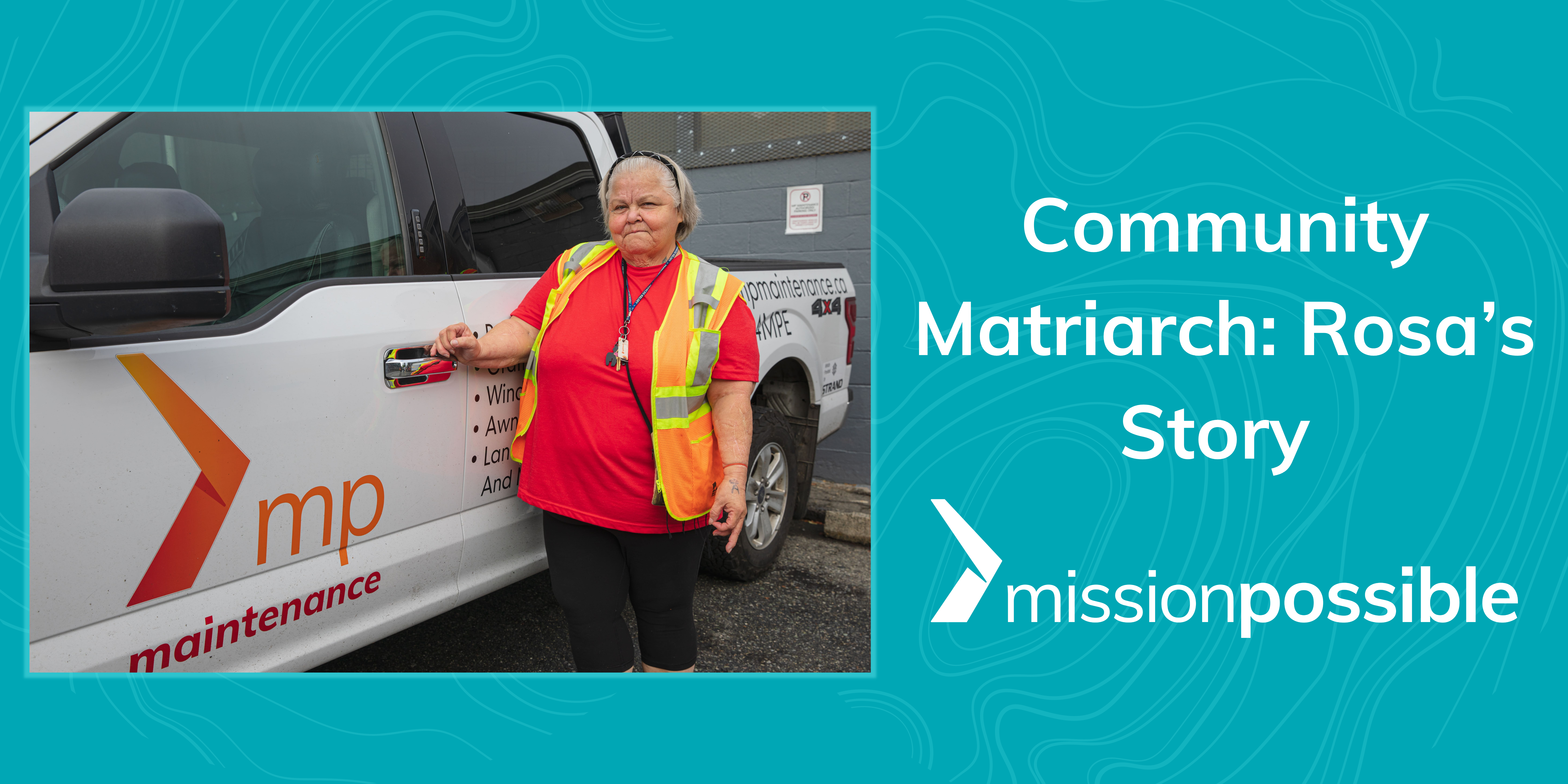 Rosa grew up in Prince George after her mom moved her family there. She was never sure why until the news reports about residential schools and unmarked graves came out in 2021, and now she suspects their relocation was related to this. In Prince George, Rosa was teased a lot and was often left to play on her own as the youngest of six. When she was young, she ran away after some things happened in her life. Despite having been forced to grow up quickly, she wouldn’t take it back now because it helped her survive homelessness. She also thanks her mom for her teachings because they also helped.

In the past, Rosa volunteered with Mission Possible, and she also attempted to join the Employment Readiness Program, but wasn’t ready at the time to follow through. Coming across MP again just two months ago, Rosa was shocked to see how much we had grown! She wasn’t sure if she could do it at first, but quickly came to enjoy her work. In particular, she enjoys cleaning washroom trailers because having lived on the streets and done sex work before, Rosa knows how important it is to have a clean bathroom and space to go to. She shares, “I love going by [the washroom trailers], seeing the people, that they’re safe and everything. I like this job very much… it’s rewarding to me.”

Rosa is also very passionate about keeping her Women’s Track family safe. She shares, “We try to tell the other ladies: don’t go far, we have to stay in sight, walk really close.” She knows that she can call her supervisor if she ever needs support, but she’s very aware and attentive while doing her routes. Working on the Women’s Track has been a joy for Rosa as she loves working with “the matriarchs of our community” as she puts it. With such a diverse team of women, she cherishes the way they support each other and treat each other like family.

Since joining MP, Rosa’s neighbours and friends have all commented on how happy she looks and how positive she has been lately. While Rosa has struggled with judgment from other people, and has lost touch with others in her life as she works on herself, she continues to fight for them to trust her and be happy for her. She passionately explains, “I needed to work on myself, and I can prove it now. I told my street sister: I proved it, that we can clean our lives out, and the younger ones can see it,” continuing, “If I can save a life down here, it’s gonna make me happy.” The support from her co-workers at Mission Possible helps with her loneliness as she loves connecting with the people here.

Since completing the Employment Readiness Program, Rosa has moved to a new place, and started to work at Eastside Works as a peer support worker. She’s also continued to work with PACE Society on a program for Aboriginal & LGBTQ+ people to improve their health. Moving forward, Rosa is keeping in mind that MP is always here to support her so that she feels less stress about her upcoming transition. She’s also learning to treat herself every once in a while and recently started with a meal at The Keg. She’s saving money and people in the community continue to see a positive change in her which has made her proud. Rosa is such a pillar in our community, and while we’re sad to see her moving on, we’re excited to see where she goes!

“It’s not them changing me, but it’s them supporting me so that I can see the better side of me… I’m so thankful for Mission Possible for letting me in. Because I’m actually doing stuff that I didn’t think I would be able to do. It made me stand taller, walk taller.”