'I found my purpose': Haisla man working to save his own from Vancouver's opioid crisis 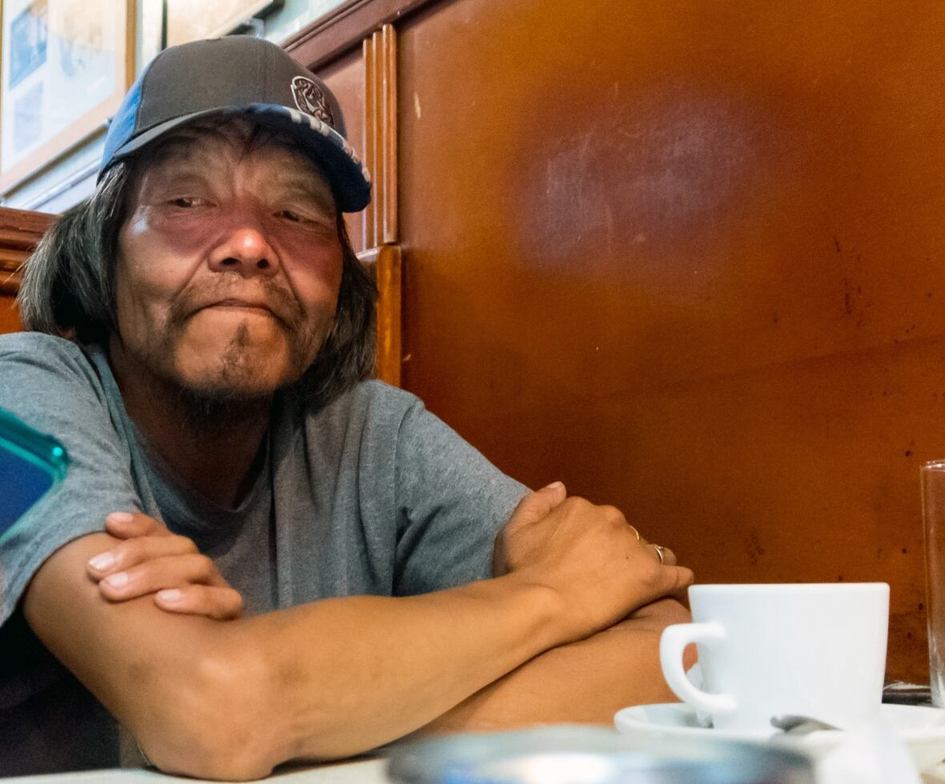 Harry moves effortlessly among drug users and cigarette hawkers, never peering too long at anyone. He seems at ease on the street and in the alleys, and it's not without reason.

The Haisla First Nation member once smoked crack cocaine during binges in the neighbourhood's alleys.

"I can still see that person struggling, lost, alone and feeling they don't deserve a good life — I know how that feels," Harry said.

Harry still comes here daily. But now he is an outreach worker with Haisla Outreach, a unique program underwritten solely by the Haisla First Nation to find its own members who are struggling with addiction and get them off the streets.

Indigenous people are over-represented in overdose deaths in Vancouver's opioid crisis. The First Nations Health Authority estimates that 193 First Nations men and women died of overdoses in B.C. in 2018, a 21 per cent increase from 2017.

But by forging a unique connection with fellow Haisla members, Harry is helping people struggling with addiction get into treatment — and in some cases, reconnect with their families.

Harry hopes his three-year-old model can be an example to other First Nations whose members are now living in the Downtown Eastside. In January, that hope became a reality. The Nisga'a Ts'amiks Society, a non-profit that delivers programs and services to urban Nisga'a Nation citizens in Metro Vancouver and Vancouver Island, hired its own outreach worker to work with Harry.

"I lived in the absolute hell of addiction and I took my family along for that ride," Harry said. "Now I feel free and I want everybody that I work with who struggles in alcohol and drugs to feel the way I feel today."

'I found my purpose'

Harry, 51, was born in the Haisla First Nation in Kitimat, B.C. Haisla means "Dwellers downriver" when translated into English.

He excelled in soccer and basketball in his teens in Kitimat, but was also living with violence in his home, he says.

He started drinking alcohol in his late teens. But when he tried cocaine at age 19, his addiction quickly accelerated from weekly to daily.

Harry's addiction reflected a national trend. According to the Royal College of Physicians and Surgeons in Canada, more than 25 per cent of Indigenous people have substance abuse problems.

Once, after a three-day drug binge in Vancouver, he returned home and saw his children when he walked in the door. Their expressions haunted him into sobriety.

"They had such hurt looks in their eyes," Harry said. "I vowed I would never do anything to bring on those hurt eyes and heartbreaks anymore."

But he still felt for people on the Downtown Eastside, and often brought coffee there.

I found my purpose with this offer.- James Harry

When he bumped into a young relative in 2017 who was deep into addiction, the pair connected and Harry encouraged him to get treatment.

One day the man reached out, asking Harry to drive him home to Kitimat. Harry drove 18 hours to get him into a treatment centre.

The young man's father was a Haisla First Nation council member, who believed Harry might be able to help others like his son.

Six months later, the council asked Harry to become their nation's first urban outreach worker, and to find their own people struggling with addiction on the Downtown Eastside and get them off the street.

"My first month into recovery, an elder told me the creator kept you here for reason and you have to find out what that reason is," Harry said. "I found my purpose with this offer."

Edwin Pfho left Kitimat in 1997 after being told to leave by his then-girlfriend's relatives. He says it was because he wasn't there for his infant daughter.

Despondent, the Haisla First Nation member travelled to the Downtown Eastside. To cope with his pain, he drank alcohol, cooking wine, hand sanitizer and even hair spray.

"I'm lucky to be here and not six-feet south after putting those things in my body," he said.

Pfho, 52, often slept wherever he passed out. Some of his friends never woke up after similar binges. After bouts in the hospital, Pfho sought treatment but later relapsed.

He was passed out on the street when he met Harry.

"He picked me up off the street and said 'My name is James Harry. I'm from the Haisla First Nation, and I want you to know that you're not alone,'" Pfho said. "It felt good to know that somebody out there did care about me. I didn't think no one cared about me."

Pfho got treatment again, but was resolute about sobriety this time. He's been sober since, and this July will celebrate his third year of sobriety. He's now employed, working for Mission Possible, a non-profit in Vancouver's Downtown Eastside providing work opportunities for people experiencing homelessness and poverty.

"If I wasn't for James I'd probably still be out there in my addiction or six feet under," Pfho said.

He visited Kitimat in December but never got to meet his now-adult daughter. He's reticent about why, but said, "One day, I hope."

A friend told me that I can't be there 24 hours. I can only do the best that I can.- James Harry

Trauma is a common denominator among the Haisla people Harry works with.

According to Harry, most are "runners" fleeing trauma. Many spent their childhoods in care like Pfho, who was adopted out at age five.

"Ninety-nine per cent of the people down there have been impacted by residential school or Sixties Scoop," Harry said. "It got passed down at home. People fled, don't want to go back and end up here. Some of them lose their lives here."

Two Haisla members Harry tried helping died of fentanyl overdoses. The deaths made him question himself: am I doing enough? Could I have done anything differently?

"It was devastating. But a friend told me that I can't be there 24 hours. I can only do the best that I can."

Harry is racing against time to help a 20-something Haisla who is deep into addiction, living on the streets and has been hospitalized multiple times.

"I can't tell you his story. That's for him to tell, but I can say he lived a horrible life," Harry said.

He last spoke to the young man, who was living in an alley, in December. "I told him that he's not alone, and that he deserves to go on and live a good life," Harry said.

Harry helped arrange for him to go to a detox facility, but the young man didn't show up. Harry hasn't seen him since. "He's just out there now," he said.

Back on Hastings Street, Harry peers back up the block before walking back. He'll continue scanning the streets and alleys for the young man, reaching out to him and hoping.

Hope is all that is left for some.

But Harry and Pfho know that even in this desolate place, hope can take on a life of its own.