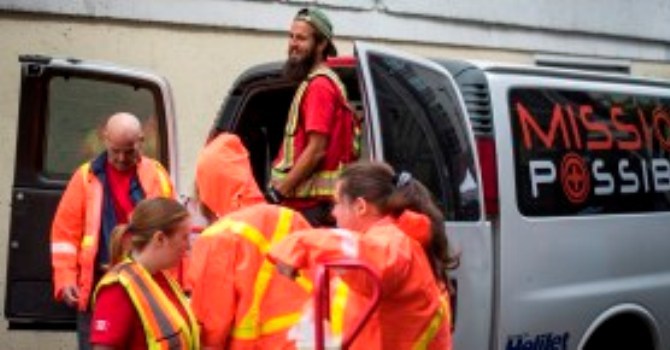 Nick Fenyo is the Mission Possible Clean Team Supervisor. We are now three months into the program, so we thought we would sit down with Nick and find out how things are going. Here are his comments:

What is the Mission Possible Clean Team?

“The job is strictly picking up litter. There are 22 different service areas so the job is a little bit different every day according to the area that we are in. We go through streets and alleys and we keep track of what we pick up so we can give a report to the city on what we are finding whether it is take out containers, coffee cups, needles or mattresses.

“What we are doing is humbling work. We are on the street, picking up trash. So for people who have done jobs in the past that had more perceived dignity, just picking up trash can be a difficult thing to wrap your head around. We are in the alleyways picking up trash and to see people embrace it is quite something.

“Everybody is embracing what we are doing. They are attempting to provide a quality service and to look back at the end of the day and to feel good about what we have done. People are saying “thank you” constantly, so that helps members of the team to feel good, and to see that what we are doing is appreciated.”

What are you trying to accomplish?

We are trying to ease people into work, to build their confidence, and build their skills. Now that we are three months into the program and we are starting to see a bit of that and their potential is coming out more and more. Some of the participants have been filling holes in the schedule with MP Maintenance as well which is a transition or step up, of sorts.”

Nick says he hopes to see more of this happening and sees it as a motivating factor for Clean Team participants, who also see it this away. “People are facing the challenge of whatever resistance they have toward work. Recognizing that and just letting people know that they are more than capable of rising to is a good thing about what we are doing. There is room and an opportunity to grow and do a good job.”

“There are people who are playing a leadership role who have more experience. They end up helping others. A team dynamic is being established. Each new person who comes in adds something, and it’s great to have a team that really cares for each other. It’s really nice to see that consideration for each other.

“There are a lot of nerves and tension for people when they start out, just like any job, so it is really nice to see team members help to break down the insecurities that new people might have in a really positive way. It’s a good system.”

How do you overcome the feeling of resistance to work and to grow?

“Definitely creating a comfortable atmosphere is the first thing. It’s a little bit different from other jobs perhaps, where during that first week or two there is a trial period and judgments are being made. But in this situation with the Clean Team it is not that way. We know you might not be coming in with right habits, or not having worked in a long time, so the first few weeks are about starting to build those good habits. Remembering to do the little things like looking at the schedule so you don’t miss a shift. So initially the goal is to create a comfortable work environment where they don’t feel as if there is judgment being made. I won’t them to know what potential I see and what value they have to the team as quickly as possible. If someone is feeling good and contributing, they want to keep going with it. Trying to build that momentum and trying not to inhibit that is important. I let people know they are doing a great job and that I really value them on the team.

"We could look at each person and see them realizing their potential. There is a feeling on the team that they are working towards something that it is not just come in and do your work and go home. We are trying to build towards something. When the six months is up we don’t want it to be the end of that story. It has been really motivating to talk about what the plan is for each individual and to see that there is a plan growing for each person. Something about the environment with the Clean Team is motivating people to think about what they really want to do after this. People are already asking me to write a reference, which is amazing and is a sign that they are thinking ahead."

What’s one of your biggest struggles?

"One of my biggest struggles is that I want to create the best working environment that I can – but not so good that people don’t want to move on! You don’t want to make people too comfortable because there has to be that ambition for something more. When someone’s been out of work for a while and then they are working it is easy to attach to what we are doing. So that’s been my challenge. To walk that line and find that balance of giving the right amount of support and reminding people that this is not a permanent job."

Tell us about a couple people on the Clean Team and the growth you see happening...

“One person that comes to mind is Chris. Just to see his growth and how everyday he makes a commitment to that growth. I asked him what’s your favorite thing about Mission Possible and he said ‘the ability to grow.’ He really does take that seriously, so it’s great to see him come in every day to see him asking “what can I do today to move forward?” It’s only been three months but it has been great to see his swagger and his confidence. Everyone is coming from a different past a different set of circumstances that was really difficult. Others may not have had the strength to make it through so go from that to way they are today is encouraging."