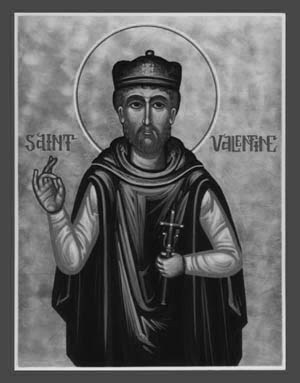 According to Wikipedia not much is known about St. Valentine. His life and martyrdom are not recorded in some of the Catholic Church's earliest records. Two of the most popular legends regarding St. Valentine are (Source - Wikipedia) :

"The Legenda Aurea of Jacobus de Voragine, compiled about 1260 and one of the most-read books of the High Middle Ages, gives sufficient details of the saints for each day of the liturgical year to inspire a homily on each occasion. The very brief vita of St Valentine has him refusing to deny Christ before the "Emperor Claudius"[25] in the year 280. Before his head was cut off, this Valentine restored sight and hearing to the daughter of his jailer. Jacobus makes a play with the etymology of "Valentine", "as containing valour".

There are many other legends behind Saint Valentine. One is that in the 1st century AD it is said that Valentine, who was a priest, defied the order of the emperor Claudius and secretly married couples so that the husbands wouldn’t have to go to war. Soldiers were sparse at this time so this was a big inconvenience to the emperor. Another legend is that Valentine refused to sacrifice to pagan gods. Being imprisoned for this, Valentine gave his testimony in prison and through his prayers healed the jailer’s daughter who was suffering from blindness. On the day of his execution he left her a note that was signed “Your Valentine.”