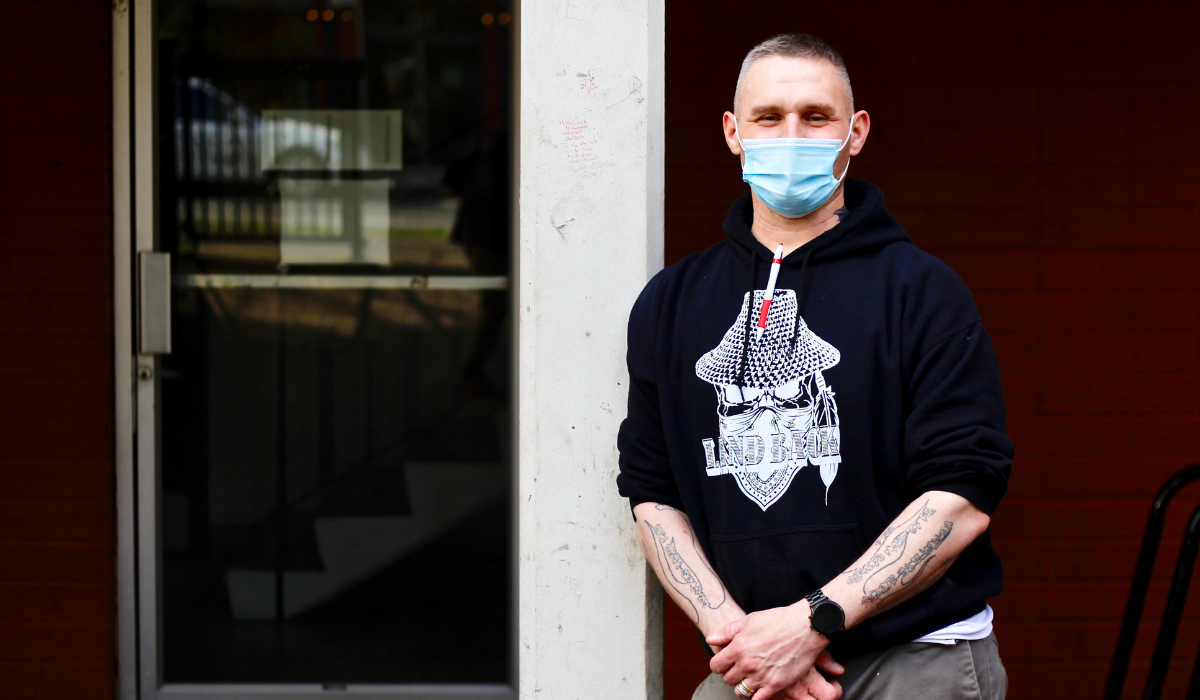 Chris Middeton is no stranger to hardship. Coming from a home challenged by substance use, and then making a difficult transition into foster care, Chris found himself searching for stability throughout his early years. In addition, the barriers and challenges he faced were exacerbated by a permanent disability.

Chris’s journey of substance use and crime began in his early years, and he eventually spent time in a detention centre. He relocated to Vancouver seeking new beginnings and opportunities, but unfortunately the unpredictable path of addiction reappeared in his life upon his arrival to the West Coast.

Chris became a father at an early age. Having lived the experience of chaotic homes throughout his childhood, Chris knew that consistency and stability were crucial to the well-being of his son. Knowing that he was unable to provide his child with the upbringing he wished to give him, he made the most difficult decision of his life, to have the parents of his son’s mother raise his son.

Addiction is far from a linear process, and Chris has bravely been riding that challenging wave throughout his life. According to Chris, getting connected to Mission Possible provided him with the sense of accountability and purpose that he needed to ensure he could create a new healthy path:

“MP is helpful; it’s a great community program. I came from a background of not having anything. But, once I realized that the people here are helpful and they have my best interest at heart, then I became more comfortable, and I got to help my community, too. I’ve been able to share about what is going on at home, or at work. And share about my views of the past and the future. Set goals. All those things are great because it helps me put things into perspective.”

In the process of setting his goals, Chris expressed a deep desire to give back to the Downtown Eastside community and to support other individuals who have struggled with substance use. He knew that his lived experience and newfound sense of direction would benefit others that wished to move forward with their lives, but did not know where to start. He learned about other organizations in the community and set a goal to work for Atira, a low barrier housing provider in the neighbourhood, where he felt that he could make an impact. He worked with his coach at Mission Possible to develop a plan to attain the experience and skills he needed to achieve this major goal in his career.

Chris quickly became a stand-out associate at Mission Possible. Starting out on the Clean Team, he spent six months working with his colleagues as he pursued his occupational and personal goals. As he neared the end of the program, Chris’ success and growth earned him additional opportunities with MP: a micro-cleaning role for the Strathcona Business Improvement Association, as well as taking on janitorial duties at the MP offices. Chris’ growth and development through his time at Mission Possible helped him to move on to the next step in his employment journey.

Today, Chris is working with Atira as a Help Contact Support Worker. As frontline staff, Chris is the first contact for many people who are struggling with poverty, homelessness, and substance use. He provides those in need with essential services such as food, health, and shelter; and once stable, Chris supports his clients with their own goals including detox, recovery, safe supply, and housing. As Chris says, “it’s all about keeping people’s dignity intact - my job is to support people, not tell them what to do.”

“Chris is one of my best staff members. He is action-oriented, proactive and multi-skilled. He doesn’t wait to be told what to do; he sometimes will sense problems before they start, and acts quickly or alerts his colleagues. He has a strong work ethic, is respectful, dedicated to his role, eager to learn, always enthusiastic about his work, but above all, Chris is trustworthy.”

Chris has also been making major strides in his personal life. He is engaged to his longtime partner, Jenna, who he says has been instrumental in his recovery journey and a major source of support for him. He says, “She is more than just my partner, she is my constant to always keep striving to be better.” Chris has also recently started to pursue a relationship with his son, who has become a positive presence in his life.

Through Chris’ story, we were able to bear witness to how work can contribute to one’s self-confidence and sense of self-worth. Chris’ determination and tenacity serves as an inspiration to those who have the privilege of knowing him. Chris is a living example of using grit and courage to overcome great adversity.

“I’m an asset. I didn’t think for a long time that I was an asset. I think that’s the most rewarding thing I got from Mission Possible. They taught me how to understand that I am worthy.”