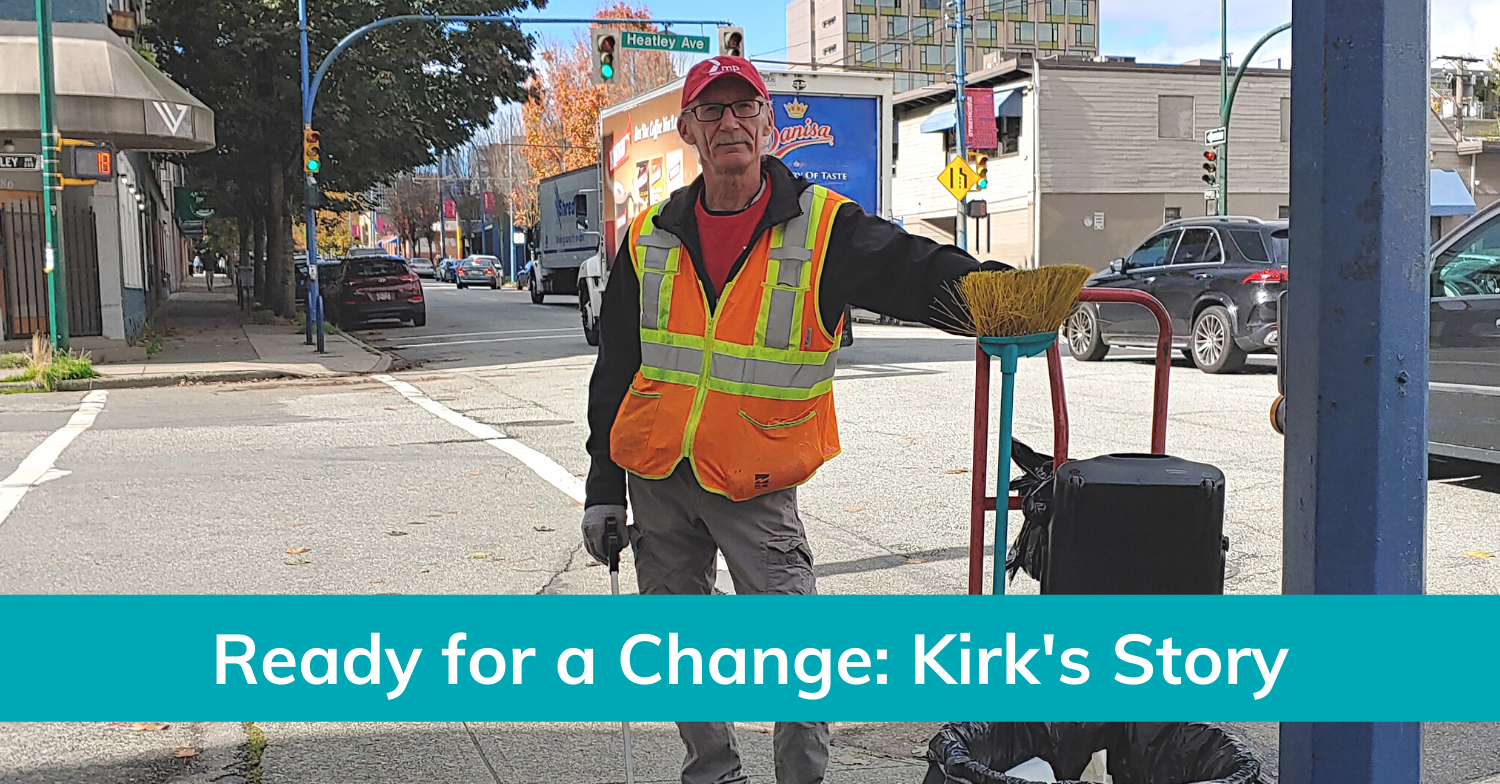 Kirk was living in Kamloops when he and his friends made a bet with each other to stop drinking for a month, just to see who could do it. At the time, Kirk was drinking a six-pack of beer every day after work, and didn’t realize he had a drinking problem until he got four days into the bet. Experiencing withdrawal symptoms, he turned to his church and found that they had already noticed that something was off. The church then offered to send him to a treatment center. Kirk recalls “By then, I think way down inside, I was ready for a change.”

Due to his personal history, finding a treatment center for Kirk wasn’t easy, but they found a place in Vancouver where he spent a year on his recovery. Kirk admits that since then, he has experienced a lot of ups and downs, and is taking life one day at a time. Despite this, he’s happy to share that he chairs AA meetings whenever he is in attendance, and that he hasn’t had any interactions with police during his time in Vancouver. This is something he is proud of because in previous places he has lived, many police officers knew him on a first name basis.

While focusing on his recovery, Kirk often saw Mission Possible’s crew members walking around in the neighbourhood. One day, he stopped one of them to ask what they do, and was told to check out the program at the office. Since then, he has enjoyed working three to four days a week, and is really glad to be doing so again. When asked what helps him most about Mission Possible, Kirk shares, “It gives me another purpose to get up... It gives me another thing to wake up to. I’m tired at the end of the day, but I feel good.”

Kirk occasionally rides his bike in the community, and often finds that the main roads have too much traffic and litter on them. Another perk of working at MP is that he can now plan his routes to go through alleys that he knows the MP crews visit daily because they’re always clean!

While working at Mission Possible, Kirk has been able to pay off some of his debt, add minutes on to his phone, and has been able to access better quality food to stock his refrigerator. He’s also finding that people at Mission Possible are incredibly pleasant. Kirk specifically likes that his supervisors are direct with him when it comes to the job and route he’s on each shift. They explain the job, what needs to be done, and how to stay safe, which Kirk appreciates.

Working has provided Kirk with a sense of security. Kirk explains, “Before I started working with MP my life had no meaning, but my life has totally changed since. I used to feel disheartened all the time, and now I have a smile on my face.” He continues, “I have days that I feel way more relaxed than I did before I started working here.” Part of this ability to relax is a result of having more money in the bank. Being paid nearly three times a month is a huge accomplishment for Kirk as he can easily access money when he needs something rather than waiting for his disability cheque to come in.

When asked about what he really values about working at MP, Kirk said, “It’s a purpose to get out of bed…[and] physically, this is one thing that’s helped out my back. This is light work which is good too.” He also shared, “In my heart and in my soul, I’m a lot happier of a person.”

While Kirk has a number of challenges he continues to work through, including finding better housing, he recently applied for and was the successful candidate to work on a BIA route for Mission Possible. The work is similar to what he’s doing now, but he’ll be working daily with the same partner and with little supervision. It’s been incredible to support Kirk as he finds stability and feels good about himself once again.

Kirk’s journey is possible because of an Impact Sponsor. It costs $500 per month to cover the costs of training, uniforms, equipment, bi-weekly coaching, and hard earned paycheques for our associates. For $6,000 a year, you can be a hero to two individuals like Kirk by becoming an Impact Sponsor. You'll receive quarterly progress reports tracking their goals and capacity building, as well as our immense gratitude. To become an Impact Sponsor, contact Brianna Mau, Development and Communications Coordinator, at brianna@mission-possible.ca