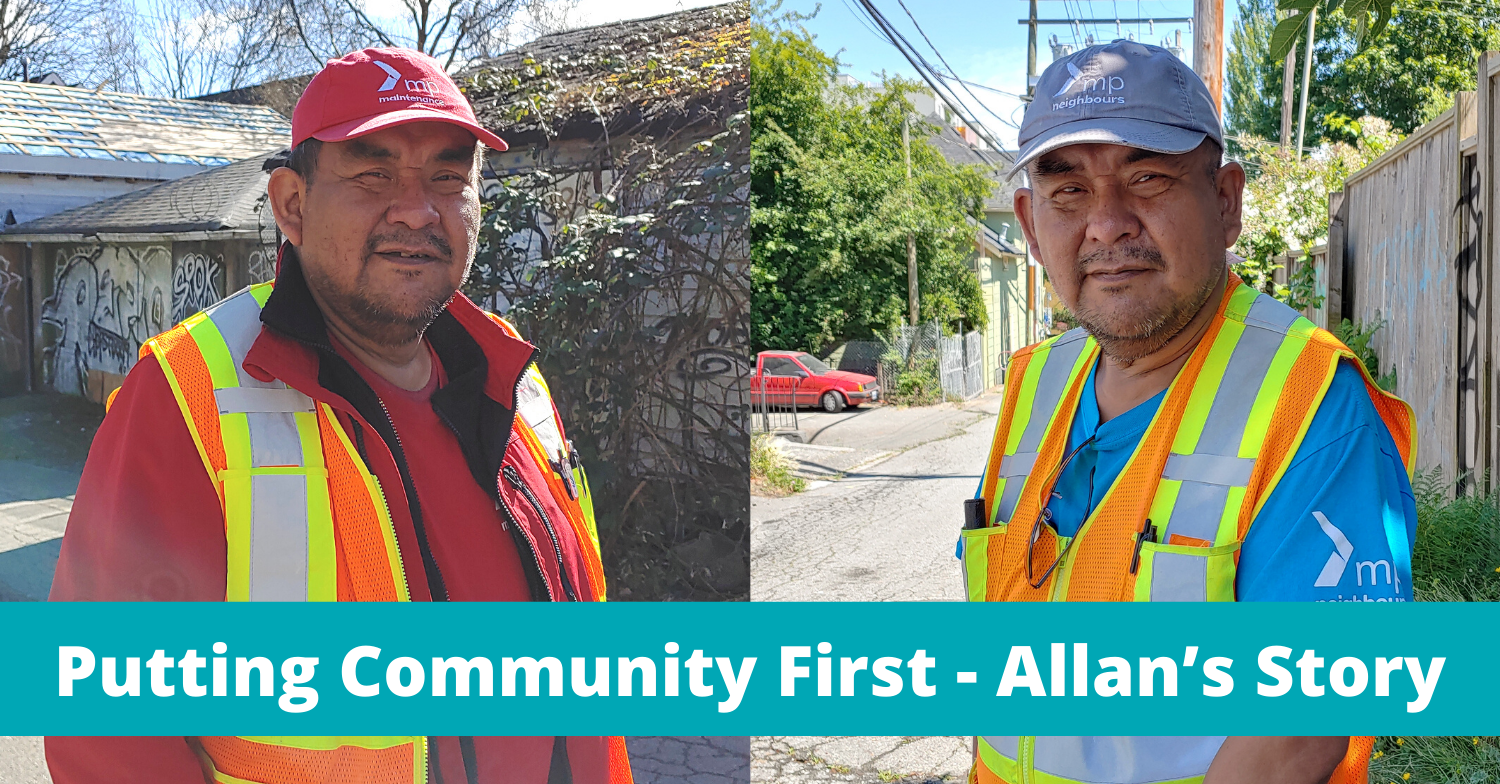 Allan started working with Mission Possible as an associate nearly three years ago, and since then he has been with MP on and off as he managed his other roles as a dad, Indigenous elder and husband along with some health concerns. In the last while, Allan has been able to take on an additional role with MP, and has focused on supporting both of our social enterprise teams. More recently, he became a permanent member of the MP Neighbours team!

For Allan, community is everything. He embraces everyone, from his Indigenous kin to his Mission Possible supervisors/co-workers and his neighbours, as his extended family.
Allan shares,

“I got into MP Neighbours because of my communication skills. I know a lot of people downtown… At first I was like, ‘I don’t think I can do this,’ because half of the young people down there today are my family, my nephews and nieces. But I toughed it out. I’m down here for a reason. It’s to pick up needles, watch out for the unhoused, and watch out for my family. And that’s what counts. They may not be my family by blood, but they’re still my family. They still call me uncle.”

This protectiveness over his family and his acceptance of everyone was instilled in him by his own experience when he arrived in Vancouver from the Island. Feeling a sense of loss because he never got a chance to learn about his culture and language, Allan felt accepted when the Cree people took him in. They taught him how to dance, and complimented his spirit and high energy.

Being a part of MP Neighbours has provided Allan with a way to incorporate his community into his everyday life. He loves being able to communicate with people, especially Indigenous youth, and making sure they are okay. In addition, it’s a great way for him to use his previous experience working in security.

Aside from working consistently and being employed over the last year, Allan is also proud that he quit drinking 15 years ago. When he felt like he was going to have a slip, he turned to his supervisors at MP. Allan shares, “It felt like everyone was taking the time to make sure I was ok, and I’m just proud to be here and that I stopped drinking.”

Allan cherishes the feeling of family in MP’s space.

“MP has been part of my family. I went through a few hard times while I was here, and I’ve held a few jobs over the past years, but I never felt comfortable. I never felt at home. But [comfortable is] how I feel here [at MP]. It feels like family. The people I work with, the staff, the environment is awesome. I walk in and everybody’s got a smile. It makes you feel at home.”

It has been incredible to walk alongside Allan in his journey from starting as an associate to becoming a permanent staff member. We are so proud of what he’s accomplished as well as his amazing work in our community!