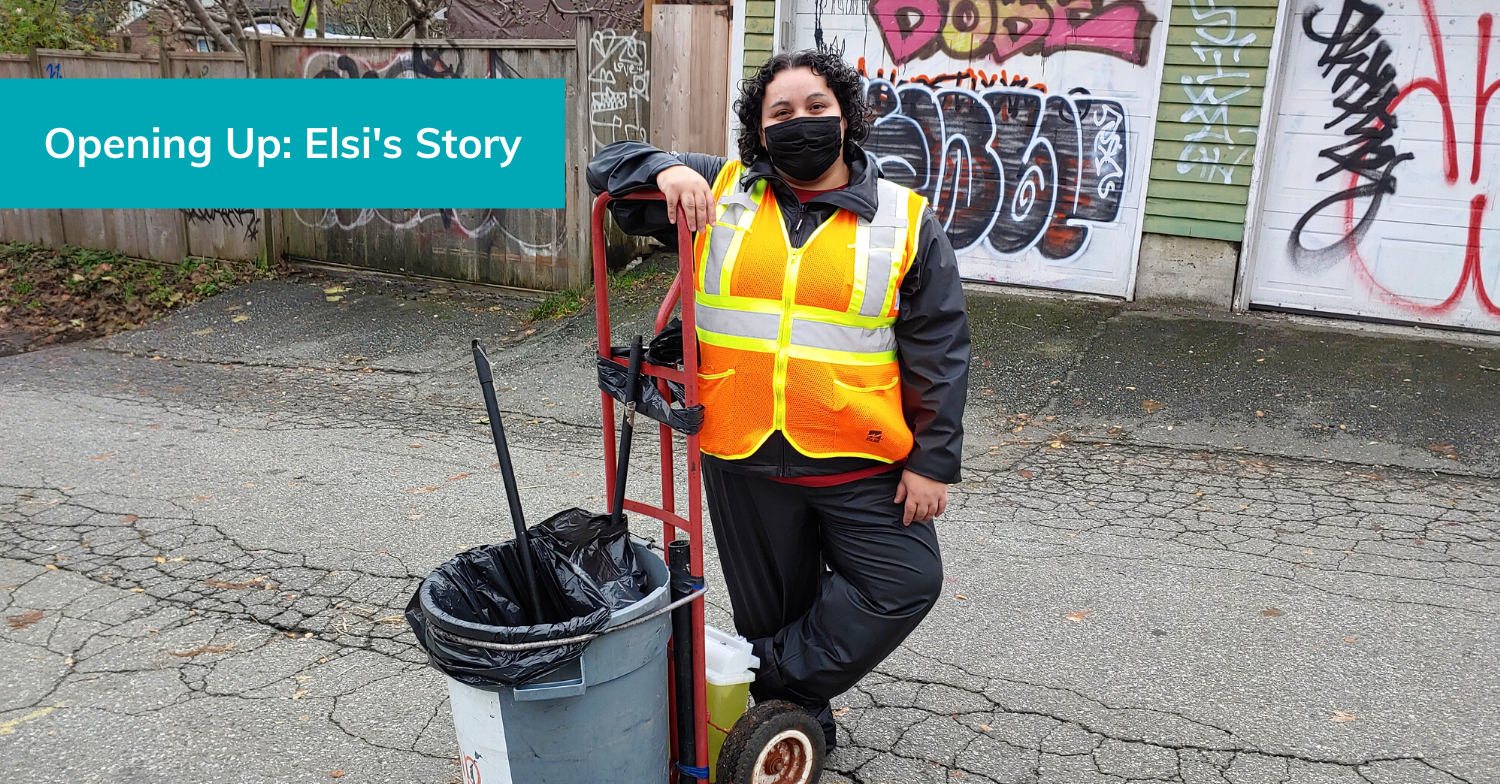 Elsi moved to Vancouver at five years old from El Salvador, and at six years old, she was adopted into a family as the youngest of five. Despite the teasing she faced at the hands of her brothers as the only girl, she looks back on her childhood fondly. After high school, Elsi went back to El Salvador, and met her first love there. She had a baby girl with her partner, but eventually had to leave him due to his substance abuse. Throughout her time in El Salvador, Elsi recalls suffering quite a bit because there was no social assistance. She shares, “I learned a lot [there], it made me value what I have and what I don’t have.” Elsi returned to Canada at her mother’s insistence while she was pregnant with her second child after spending six years away.

Back in Canada, Elsi continued to face challenges such as a precarious living situation. Often having disagreements with her mom, she would have to couch surf and eventually had to live in shelters with her son as well. Her main goal was finding housing because she craved privacy for her family. At this point, Elsi didn’t know that her son is autistic. It wasn’t until his behaviour started changing that she realized, and when it did, her social worker and the ministry got involved. Even though they were receiving housing and her son was attending school, Elsi wasn’t financially stable and was separated from her son. Although she wishes that things could be different, she didn’t feel equipped to raise an autistic child, and having regular visitations with him made things a bit better.

Elsi learned about MP from her previous roommate who had just entered our program. At around the same time, she had support to find housing and was also approved for disability. With this new found stability, Elsi was ready to give work a try.

Because she loves interacting with people and learning their stories, Elsi’s favourite part about MP is all the people! She explains “[The other associates] share their stories with me. I am so proud of that because I’m glad they trust their story with me. They are open.” Receiving that trust helped Elsi open up herself as well. Another reason she loves working at Mission Possible is the interaction she has with community members. Being able to tell them what she has experienced at MP and providing them with support is something that Elsi is passionate about.

While Elsi has had some health challenges, she hasn’t found working to be too challenging. In fact, she has enjoyed working so much that she applied for MP’s office janitor position and was the successful candidate! Working at MP has allowed Elsi to work on her communication skills, as well as learn how to work on a team. She’s enjoyed getting to know other people’s strengths, and working together to get jobs done in a way that makes it as easy as possible for everyone.

Elsi has been working at MP for over a year now, and she’s glad to be part of this family. She shares, “I’m open more than before. I give my heart to people who are willing to accept my help. I can do stuff that I did not imagine I could do.” Seeing her progress, Elsi is proud of how far she’s come and has a better understanding now of what she wants to do moving forward. She still gets to see her son on the weekends and she greatly cherishes those moments. As for her daughter, she is now 13 years old and still lives in El Salvador, so one of Elsi’s goals is to save enough money to visit. Elsi is enjoying her work right now and has been speaking with her coach to come up with a future plan.

Elsi has a huge heart and cares deeply for those around her. At MP, we are constantly amazed at how willing she is to go above and beyond to make people safe and happy!