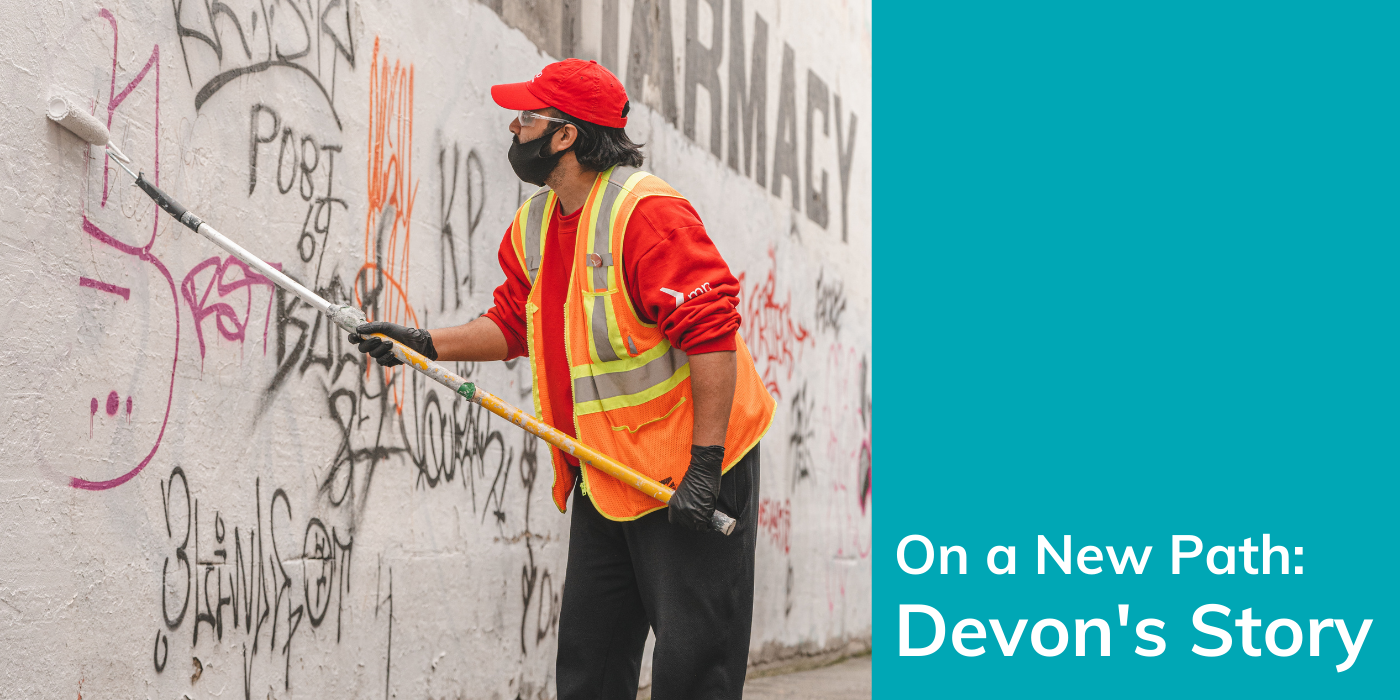 Devon started working with Mission Possible in February 2021 after being referred through a court program, one of MP’s community partners. Initially, he thought he would finish his court hours, then get back to what he was doing before. Within a week, his plans changed. Devon shares,

“I’ve never worked for a company that has a culture like it is here.  Everyone is so engaging and everyone is always [checking in] because they care. I was pleasantly surprised because I was kind of forced into this situation, but after I finished my court hours, I wanted to stick around.”

He hasn’t looked back since, and one of the main reasons is because having a day to day routine has helped with his recovery. While Devon has worked in carpentry and construction for much of his life, and even had his own business for a bit, he enjoys coming to work, putting his time in, and clocking out at the end of the day. Having this structure keeps him busy, which as he puts it, keeps him out of trouble.

Back in February, Devon started out on the Clean Team. Working two to three days at the beginning and then increasing to four, then five, helped Devon create and maintain his routine. He’s glad that MP returns people to work gradually, because he knows that he wasn’t ready to do five days a week when he started. As he got used to working more frequently, Devon felt he was ready for a new challenge, so he applied to become a part of the Graffiti Removal team. While he was working with that team, Devon started helping out our other crews as needed, and just recently, he officially joined the Suite Turnover Team which has given him the chance to learn how to do even more services. Having these opportunities to grow and learn more has been very beneficial for Devon. He highlights, “I’m just super proud of being a part of this team, and all the other stuff that Mission Possible does.”

While Devon came to Mission Possible with some valuable work experience, what he has really learned and cultivated during his time at MP are his people skills. “I’ve noticed just being in the room, seeing how certain supervisors are, I’m picking up on things like that.” Along with being more comfortable carrying a conversation, Devon also noted that he’s learned how to troubleshoot and de-escalate certain situations. “I would take the people skills I’ve learned here as a big bonus.”

Moving forward, Devon is hoping to get a driver’s license, because having one will help open up his opportunities both within and outside of MP. Working with his coach, he’s enjoyed learning how to be honest with himself, and having someone to be accountable to. “Every time [I met with my coach, he] helped me accomplish something that I might not have done on my own, or would’ve taken me a while to do, so it’s very helpful.”

If the next six months are anything like Devon’s last six, we know he’s going to do incredible things! Devon shares, “I’m excited for what the future holds.”