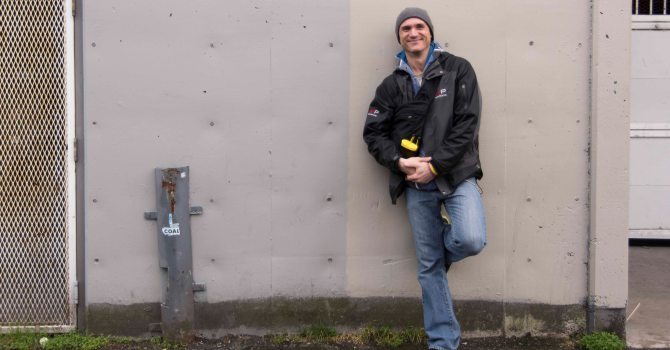 Tired of being defined by living on welfare, in a single room occupancy home, heavily in addiction and with mental health struggles, J desired a purpose.  He became serious about his recovery, and in late 2012 approached Mission Possible with a longing for community and meaning. J spent time volunteering out of the Powell Street community space, helping with a newly-formed hospital visitation team.

Soon after, J heard about an open position with Mission Possible Neighbours, a community-led safety and security team, and saw this as an opportunity to continue taking positive steps forward in his life. He attended our workshops, learning soft skills like professionalism, teamwork and self-care, and from there he interviewed for a position with the Neighbours team.

“It was a struggle. My rebellious heart wanted to give up,” he says about his time in training. “But I knew I had to have real change and that’s what made me push through.”

J felt encouraged in his first few weeks as an MP Neighbours associate and quickly hit his stride. He was a natural leader and he completed his six month contract well, building positive relationships with his team members, proving his dependability and displaying excellent workmanship. J was finding a purpose.

With an opening in the team as a supervisor or Lead Patroller, J returned to MP Neighbours in a permanent position.

Recently, we had the opportunity to welcome J in his newest role as MP Neighbours Coordinator. He’s doing a fantastic job of encouraging and mentoring people as they build their own sense of meaning and purpose.

J is an example of someone who has walked through Mission Possible’s doors ready and willing to make positive changes in his life. Oftentimes, people in the Downtown Eastside are simply looking for an opportunity for momentum forward but they don’t know where to begin. Through training, advising and work, our hope is to encourage these individuals to join us in a journey towards sustainable living and lasting change.