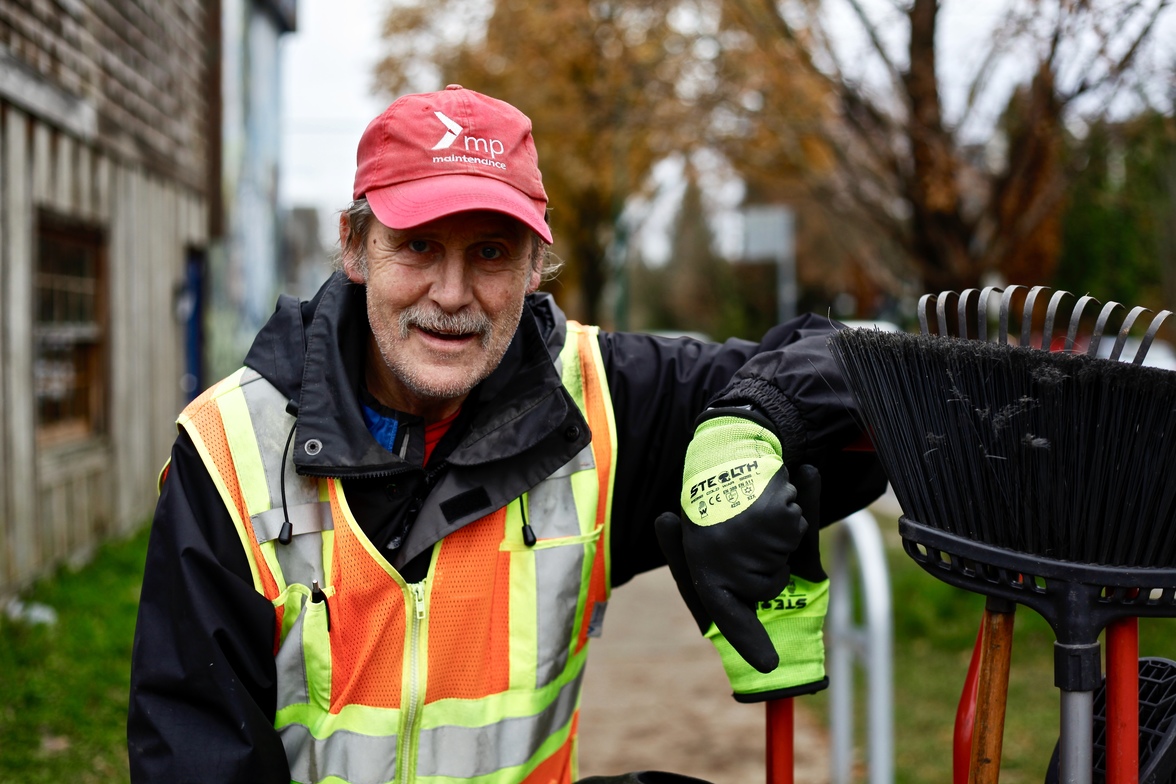 If you’re an early riser in East Vancouver, you may have seen Terry zipping around on his scooter on his way to work. “I’m up at 4:45 a.m., and I’m at work by 6:30. I’m excited to go into work every day!” he states enthusiastically. Terry is filled with positive energy, and provides a warm, friendly presence each day along his microcleaning route in Mount Pleasant. Terry picks up litter and needles for the Mount Pleasant Business Improvement Association, keeping the streets clean and safe for local residents.

Terry isn’t one to talk about his past, but was willing to share that a horrific car accident in 1991 caused his quality of life to decline. In that accident, he suffered a catastrophic back injury that led him to be hospitalized for a lengthy period of time. “I was loaded with painkillers. I had to learn to walk all over again. Life was hell for many years.”

Three years ago, Terry decided it was time to make a change. After a long battle with addiction, he made strides in recovery, and set out to find work. He joined Mission Possible two years ago, and enjoys his job immensely. Though he initially struggled, he is happy to report that he has become stronger through his work, both physically and mentally. As Terry says, “much like anything else, you start something that feels impossible to do at first and the more you do it, the better you get.” One of his favourite parts of his job is that he feels very rewarded for his work, from people passing by him cleaning the streets and saying “thank you”, to getting to know the managers of the businesses he services, to simply being able to see the tangible difference that he makes to his community.

Thankfully, the COVID-19 pandemic has not compromised Terry’s employment, but it has impacted his personal life. He finds it lonely to not be able to have company because “there’s only so many times you can vacuum!” Though he admits it can be frustrating to see people not follow the rules, he is uplifted by the hard work of many organizations to keep everyone safe, and he himself has a “new normal” of always having a mask and hand sanitizer in his back pocket.

When asked about his goals, Terry is proud that he’s accomplished nearly everything he ever set out to do, including finding stable housing, quitting drugs and smoking, having a permanent job, and purchasing his electric scooter. The very last thing on his list is to get his driver's license back, a goal that has been hindered by the pandemic. Overall, he says, “My life is completely different. I’m in a stable spot and nothing could spoil it or make me want to screw it up in any way...Mission Possible has completely changed my life for the better!”

Terry’s journey is possible because of an Impact Sponsor. It costs $500 per month to cover the costs of training, uniforms, equipment, bi-weekly coaching, and hard earned paycheques for our associates. For $6,000 a year, you can be a hero to two individuals like Terry by becoming an Impact Sponsor. You receive quarterly progress reports tracking their goals and capacity building, as well as our immense gratitude. To become an Impact Sponsor, contact Jasmine Allen, Director of Partnerships, at jasmine@mission-possible.ca