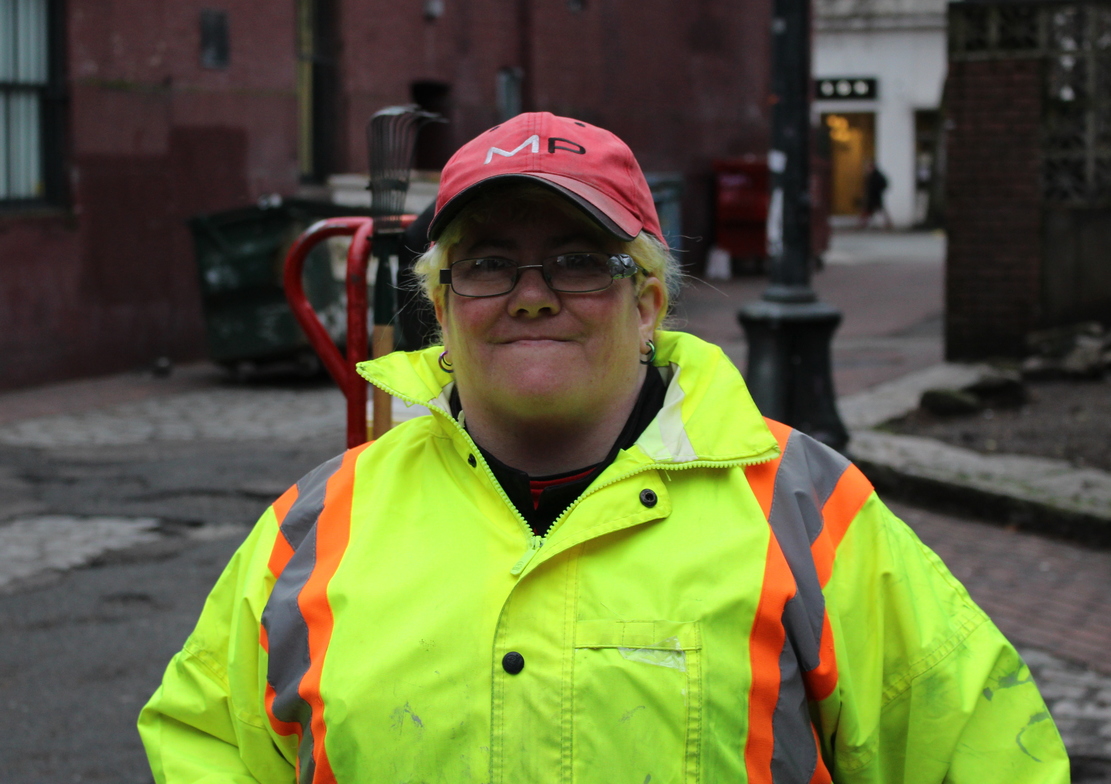 Nicole is a valued member of the Downtown Eastside and Strathcona neighbourhoods that many people recognize. She makes herself known through her work at Benny’s, a local grocery store in Strathcona, and at Mission Possible as a Kitchen Assistant for Saturday Power Breakfasts. Beyond just that though, people know and love her for her big heart and genuine nature.

Her natural compassion, however, was in part developed through undergoing difficulty in her own life. While growing up, Nicole struggled with maintaining stability. Her family moved around BC frequently, her parents divorced, and she was physically abused. These hardships drew her to substance abuse at a young age, and she was kicked out of her house when she was only 18 and just shy of graduating high school. Her resiliency shows through her ability to still graduate, but the barriers began to become too much to overcome.

After moving to Vancouver with her boyfriend, the couple found themselves relying on drugs and alcohol to cope with their struggles. They stopped completely, however, when they found out they were about to become young parents. Again, Nicole showed great tenacity through her ability to pursue recovery for the sake of her new family.

Regrettably, the unfortunate circumstances continued. When Nicole’s family had grown to four children, they were unexpectedly evicted from their home, leaving them in a shelter. The shelter provided very little support in her search for stability for her family, and Nicole had to contemplate moving out of Vancouver, which would separate her children from their schools, daycare, and medical support that Nicole had fought hard to secure.

Things finally started looking up for Nicole when she got a call from BC Housing and she was able to get a permanent roof over her children’s heads. Nicole was able to volunteer at the Strathcona Community Kitchen where she discovered her love of cooking. The volunteer program did not last very long, but she knew that she had to fight for stability afterwards.

Hearing about Mission Possible seemed like it could be the perfect next step with it’s supportive environment, one-on-one coaching, and a sense of community. Nicole attended an information session and quickly joined Mission Possible’s Clean Team, where her confidence began to skyrocket. Even in her early days at Mission Possible, Nicole notes that she always felt immensely cared for by the staff and supervisors and said, “they really care about people who come through their doors and will support them to find employment.”

During her time at Mission Possible, Nicole learned many valuable lessons. Notably, the skill of being patient and able to approach a situation in many different ways has proved extremely useful. Nicole notes that she “learned to keep more of a level head under stressful situations, and to not take things so personal because you never know what people are dealing with. Sometimes people’s reactions are not about you at all and instead about completely different things.” In addition to that, Nicole’s confidence in herself has grown. Using the tools she learned in her coaching, she now knows that she is able to tackle challenges as they come her way, and she can be assured that a team will always have her back.

Evidently, a lot went into the Nicole that we see today. Through the highs, lows, and rocky roads, she credits Mission Possible with helping her find stability in employment and her personal life. Nicole has always had the ability to shape her future to be a bright one, and Mission Possible is proud to have helped her along her journey with tools and support.

You can help others like Nicole gain stability in their lives. Click here to make a donation today.