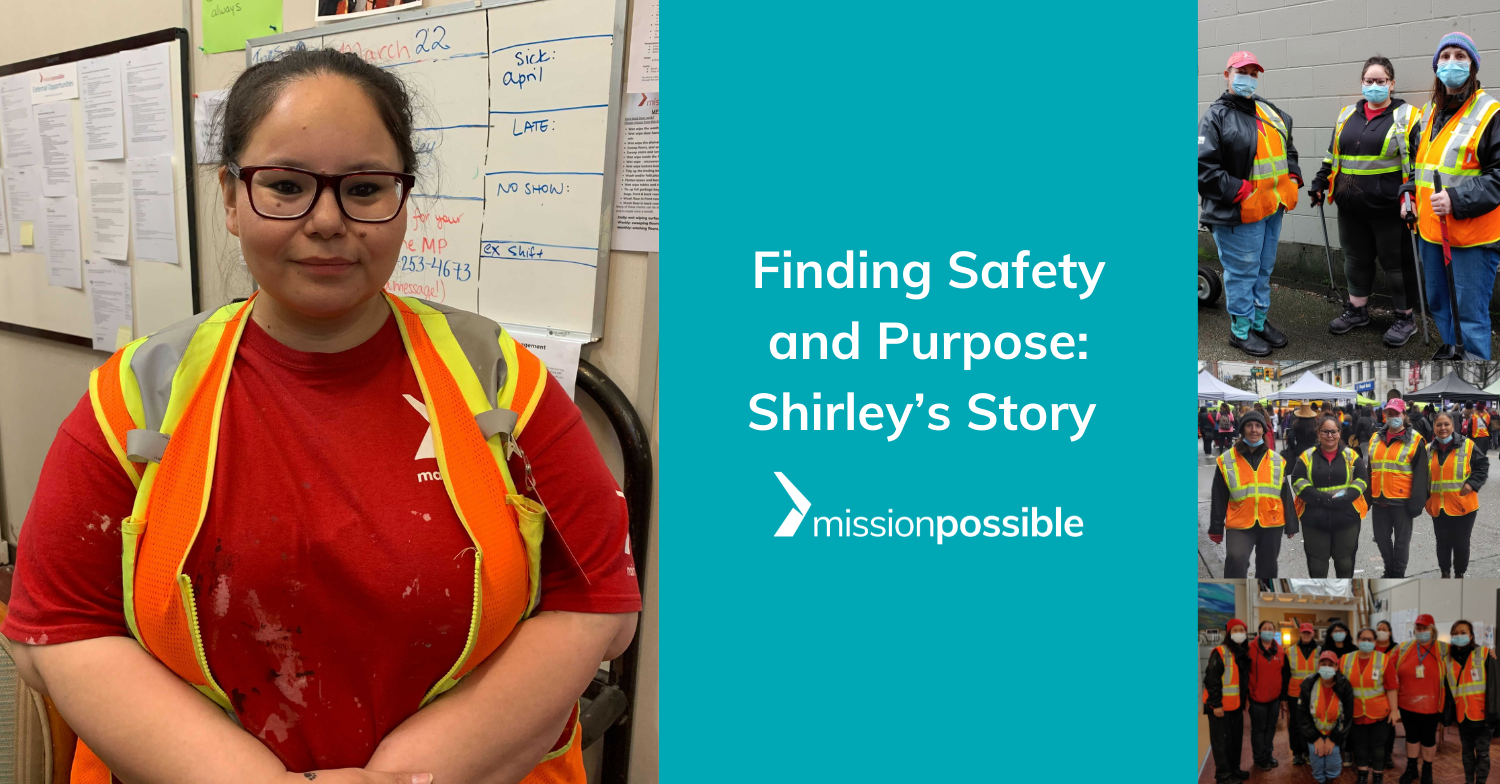 In 2011, Shirley hopped on a bus from Manitoba to Vancouver after an argument with her sister. Looking back now, she sees that she was young and naive to run away from her problems, but having some space is ultimately what she needed. Shirley shares, “It all snowballed, but you know what, I think that was the best thing for me, because it got me to where I am today. I kinda needed that space.”

When Shirley arrived in Vancouver with no money, no belongings, and no plans to stay, she turned to a shelter which took her in. While staying there, the shelter workers left a positive impact on her which helped her get where she is now. Moving to Vancouver was quite the adjustment as Shirley had only lived in small towns. She felt claustrophobic and was shocked by the diversity. However, she reports that five years later, she’s really happy and has also been able to visit her family back in Manitoba.

Shirley was walking home after dropping off her resume at a few potential work sites when she nearly walked right into Mission Possible’s sign outside of our office. Having lost her previous jobs due to the pandemic and struggling to find a new one in the midst of it, Shirley felt relieved when she learned that she would be able to start working soon after attending workshops. “When I came in here it was a different environment, atmosphere. It felt like a big weight was lifted off my shoulders,” she shares. She was also excited at how close MP was to her home, and was surprised she had never noticed the sign before!

Immediately, Shirley felt welcomed into the space and is particularly fond of how the MP team is understanding of people’s personal situations. A moment that really stands out to her is when a coworker told her that she is humble, one of MP’s core values. Shirley had never had someone recognize that quality in her before, and it made her feel good. Working at MP has also helped with Shirley’s financial burden and that has allowed her to relax.

While she has faced some health challenges during her time at MP that prevented her from walking for long periods, Shirley never let that stop her. To keep working, she started helping the Women’s Track washroom trailers cleaning team. Because of her experience living in the Downtown Eastside, she was really committed to keeping the washrooms and the community clean for the people who use them. Shirley was glad for this opportunity and explained, “I just enjoy working with new people, and I love coming here because the people here are so nice. The environment is awesome, and I feel safe.”

Despite the challenges that Shirley has faced, she’s proud to have completed her resume, written a cover letter and applied to be a Lead Associate with the Women’s Track at Mission Possible. As the successful candidate, she’s been assisting the Women’s Track supervisors with training new associates, and guiding them as they get back to work. Talking to her coach was very helpful in this process because they listen without judgment and understand what she’s expressing.

Looking forward, Shirley is excited to share that she just accepted a position as a Custodian at UGM. With this full time position, she is looking forward to what the rest of the year will bring her and hopes that she’ll be able to improve her overall well being as well. Since starting at Mission Possible, Shirley feels happier now, and like she can just be herself.