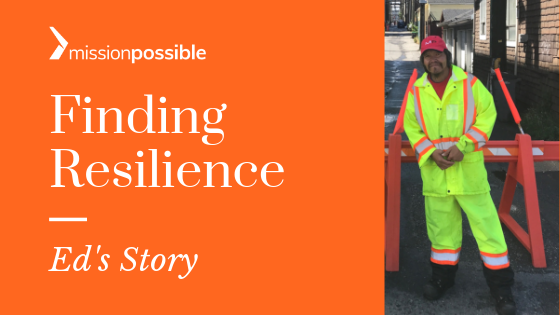 If you had met Ed in early 2017 while he was struggling with addiction, poverty, and surviving in Vancouver’s Downtown Eastside, you might not have seen the best parts of him like his generosity, strength, and patience. Unfortunately, truth be told, Ed did not see these characteristics in himself either.

Ed has overcome a myriad of barriers in his life. As a member of the Haisla Nation, he has lived with the everyday consequences of colonization. For Ed, this manifested as a pattern of alcohol abuse since a young age. When he was 21, he found out that he had been adopted as a child. With his life feeling increasingly out of his control and lacking the support needed to keep him afloat, Ed’s addiction to alcohol deepened. At the worst times of his alcoholism, his addiction caused him to shoplift mouthwash, hairspray, or rubbing alcohol to numb his pain. Alcoholism tainted every aspect of Ed’s life, particularly when he fell and injured himself during a drunken fight. This injury required plates to be placed in his back and added a barrier of chronic pain to his life. After losing a particularly close friend to alcoholism, Ed knew it was time for him to seriously pursue sobriety.

Ed joined Mission Possible at the encouragement of two Mission Possible supervisors and began working on his challenges to employment. Having to relearn how to embrace routine and build relationships was difficult for Ed, but he notes that the support from his coach helped him maintain sobriety and set goals of how to further improve his life, such as improving interpersonal skills, and moving into better housing. Mission Possible did not give Ed short-term solutions that only addressed symptoms of his challenges, but instead helped empower Ed to find solutions to the root causes. This is important as Ed notes, “Mission Possible was a big test for me… Having all that money. It could have been easy to just go back into my addiction. But the support I received here from my coach helped me.”

Mission Possible taught Ed how to prioritize goals in his life, and since then Ed has made personal and professional goals that speak to his values. Professionally, Ed has completed his time at Mission Possible and is taking steps to attend Native Education College in Vancouver to become a counsellor, which the Haisla First Nation will financially support. He was inspired to pursue this field after sharing his story of recovery through public speaking events, and being inspired by the positive change he can spark. On a personal level, Ed has maintained his sobriety and has taken part of Haisla healing retreats in Kitimat. Ed is also working on reconnecting with his family, especially his daughter who has only known Ed during his struggle with alcoholism. He knows that it will likely not be a flawless reunion, but his new self has the patience and wisdom to be resilient.

Ed is living proof that despite persistent and deep-seated barriers, there is always hope and possibility. Ed tells us that “I’ve been living my best life since I’ve been sober”, and Mission Possible is honoured to be a part of his healing journey. Members of Vancouver’s Downtown Eastside who face barriers such as addiction and colonization have all too often been written off as lost causes, but Ed is but one example that proves that kindness, resilience, and compassion resides in these people, ready to be utilized when opportunities and support are available.

Ed's Mission Possible journey was financially supported by one of our generous contributors to our Impact Sponsorship program. It costs Mission Possible roughly $500 per month to cover the costs of training, uniforms, safety and working gear, bi-weekly coaching, and hard earned paycheques of our program participants. For $6,000 a year, you can be a hero to two individuals like Ed by becoming an Impact Sponsor. You will receive quarterly reports on the progress of the individuals that are receiving your support, tracking their goals and capacity building over their six-month term, as well as our immense gratitude. To become an Impact Sponsor, contact Jasmine Allen, Director of Partnerships, at jasmine@mission-possible.ca.