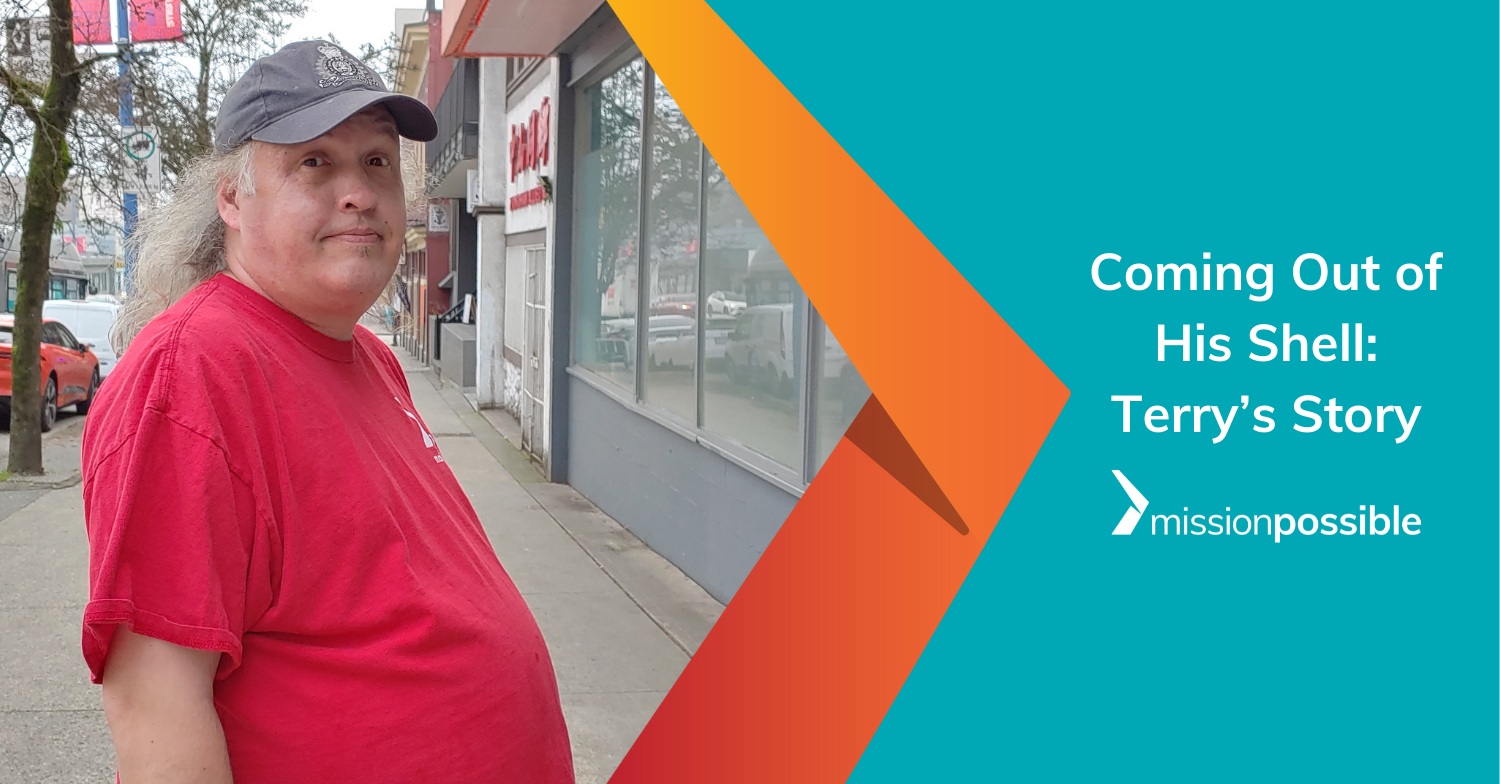 Terry moved back and forth between Alberta and BC when he was growing up, but spent most of his upbringing in Calgary. His childhood is quite foggy, but he shared that it was a tough time as he survived verbal and physical abuse in the early 80's. In the early 90's, after he experienced a huge family loss, he decided to hitchhike into Vancouver. When he first came out here, he worked as a background extra in the film industry and later was a dishwasher in multiple restaurants. However, struggling with his anxiety and depression, Terry had taken a number of years off work before coming to Mission Possible.

Terry heard about MP from a friend before the pandemic started, but he felt like he would be “too embarrassed and self-conscious” to join the team. However, he’s happy to share that that is not how he feels now! While Terry has faced some challenges when it comes to his health and has had to take some time off work in the past, working has helped Terry become more confident and he has enjoyed being outdoors more.

His favourite parts of being on the Clean Team are the shifts where he gets to clean plazas throughout the city with one of the Clean Team supervisors. As they go to each plaza by truck, Terry likes that he gets to see more of the city. Terry also shares, “One of the perks about the job is when people thank me [while I’m on my cleaning routes], and I get that occasionally. It feels good! The job is rewarding that way.”

Because of his anxiety, Terry has found it difficult to connect with other associates, but during his time at MP, he’s been able to work on being the first to approach people and start conversations. He hopes that as COVID restrictions loosen, and masks become optional again, he’ll be able to remember names better which will decrease his anxiety. Recently, Terry has been happily having more conversations with other associates, and feels like one person in particular may become a good friend.

Although Terry still feels socially awkward, his comfortability in MP’s space shows in the way he interacts with others now. Terry explains, “I think I’ve come out of my shell a little bit and I've found out how much I’m capable of doing.”

Terry likes that work gives him something to do, and shares a quote that his twin sister messaged him, “A job gives you purpose,” and Terry is excited to share that he’s starting to feel that way. Despite the challenges that Terry is facing, he shares “I do like working here. I just hope that my body keeps going. I’m doing the best I can! I usually feel good after work.”

With his tenacity and determination, Terry has recently joined the landscaping team and has really enjoyed it. While the new tasks, like weeding and leaf blowing, can be tough on his back, he sees landscaping as something that he can get used to!

“I’m proud that I’m still here and that there aren’t too many things that will keep me from working now. I want to make a little more money, but I do enjoy the job.” We’re proud that Terry is here as well!