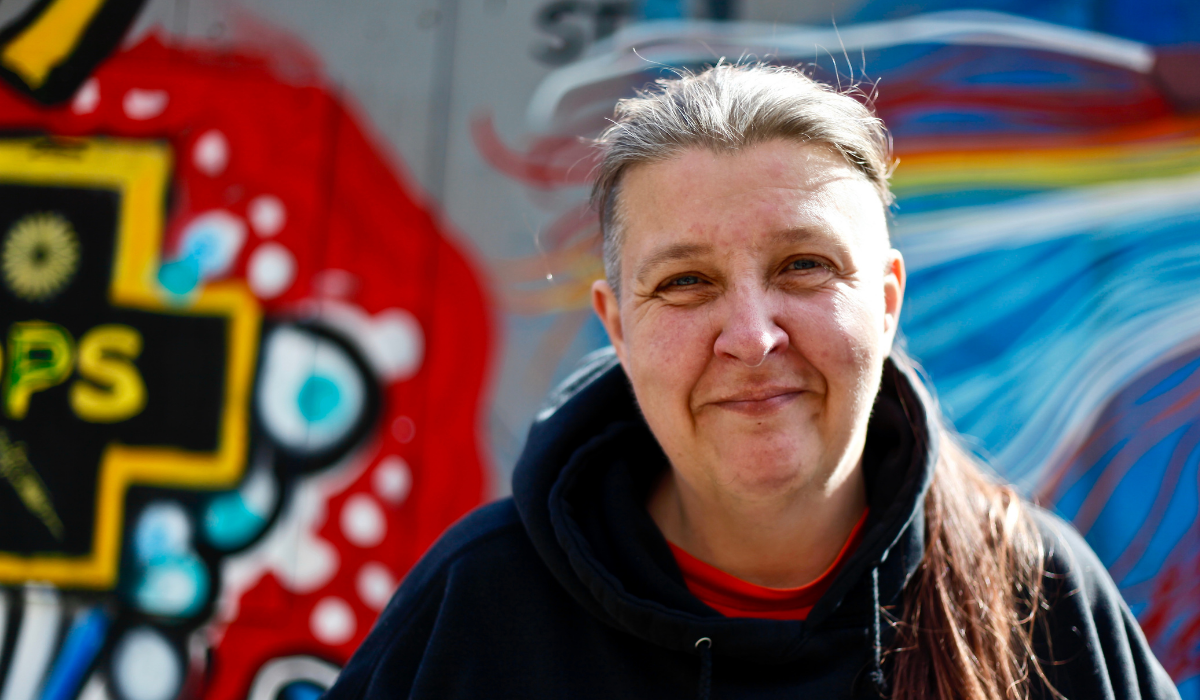 Shawna Taylor came to Mission Possible expecting to find work, but she moved on having made more meaningful connections than she could’ve imagined.

Early on in the COVID-19 pandemic, with nothing to do, Shawna heard Mission Possible was still hiring. Having volunteered with us a number of years ago, she took the plunge and re-joined the workforce. Shawna shares, “When I first came into MP, my mindset was just to do the work, not make any friends, just head down, do what you need to do. My first day there, that was out the window.”

Making an instant connection with her supervisor, she found herself laughing and having fun. Shawna explains, “You know how sometimes when you start working you feel like you’re the lowest person on the totem pole? I never felt that here. I felt like I was an equal right off the get go.”

While in the Employment Readiness Program, Shawna worked with both the Women’s Track and the Co-Ed team. For Shawna, she felt supported on both programs, but enjoyed having the opportunity to connect with women on the Women’s Track. She really enjoyed getting to know each team member better and learning about their stories as it helped widen her perspective. Shawna describes the Women’s Track as “a soft landing for women who might be a little nervous or a little scared to put themselves out to work.” She continues, “It’s a soft place to land and a good place to launch.”

While Shawna had positive experiences on both teams, she faced challenges with her mental health as she experiences PTSD, depression and anxiety. Some days she wanted to be left alone and looked for every reason to not show up to work, but when she showed up time and time again, she came to appreciate the support of her peers.

Knowing that many associates were going through similar challenges helped her feel less alone. It was also helpful to talk to others about what strategies work best for them, and learn from each other. Ultimately, Shawna wants people to know that they don’t need to suffer alone. She passionately shared, “Why keep it bottled up if my story can heal and help someone carry on in their journey? You may see me struggle but you’ll never see me give up.”

Shawna appreciates the flexibility that was provided to her at MP. When she shared her issues, supervisors quelled her worries by meeting her where she was at. It made her feel comfortable and safe.

During her time at MP, Shawna enjoyed all aspects of working, but her favourite part was the camaraderie between associates and staff. It gave her a sense of belonging which motivated her and gave her momentum to keep trying. This also made her more confident in herself.

Prior to re-entering the workforce, Shawna struggled to complete tasks which she attributed to her lack of self-belief. However, she stuck to a goal at MP, to get a position at Atira Women’s Resource Society, and she reached it!

For the past 10 months, Shawna has been a Front Desk Worker at a couple of Atira’s properties. She’s very proud to be where she is now. Although Shawna is no longer working with MP, she knows that she has a family here that will continue to support her. She shares, “It’s nice to have a core group of people that’ll go ‘Hey you got it, go for it! And if it doesn’t work, come back and we’ll help you again!’” Having the support of her coaches and supervisors helped her take the leap to apply for Atira, and it paid off!

Working for Atira was Shawna’s main goal because she sees it as a stepping stone to get to her dream job where she wants to help support youth who are aging out of the system.

Having grown up in a foster care group home, and within the Downtown Eastside, when Shawna aged out of the system, she was left to figure things out on her own. She fell into substance use and struggled with her mental health. However, she managed to fight her way out, and is now 30+ years clean. She wants to be there at this transition period as she can genuinely relate to this situation and provide guidance.

Moving forward everyday, Shawna’s inspirations include her two children who she lost to their own experience with substance use disorder and her youngest child who is currently struggling through it as well. They motivate her to do all she can to make the world a safer and better place for youth.

“I’ve lived a life where I was told I was nothing, nobody, wasn’t going to amount to anything...as of last year, I stopped believing that. Mission Possible was a big key in that… I believe in myself more now. I’m able to put my mind to things and get things done... Before I didn’t have enough faith in myself to do it and now even if I feel like I can’t do it, I give it a try.”

As Shawna was one of the Momentum Award Winners at The 2021 Mission Possible Gala, we were lucky enough to have her share her story in a video as well. Check it out now!